PVC is inherently fire resistant as it contains more than 50% of chlorine.

An exception among general-purpose plastics, PVC is inherently fire resistant, as it contains more than 50% of chlorine. When PVC products are burned, thermal cracking produces hydrogen chloride gas, that remains on the outer surface of the PVC and slows down the combustion reaction, preventing the PVC from burning. The gas is also detectable by its highly unpleasant odour, even at concentrations well below those that could be harmful to health. This feature allows early detection of a fire. Gaseous hydrochloric acid is, for example, much less hazardous than carbon monoxide, which is narcotic, has no smell and can rapidly lead to paralysis and death.

Other advantages of PVC are that it releases less combustion heat than other plastics – hence inhibiting the spread of fire – and produces no or very few flaming droplets or debris. Burning PVC yields an expanded carbonaceous structure usually called ‘intumescence’. This structure forms a thermal barrier protecting underlying parts. In some cases, such as pipes, PVC can even prevent fire spreading by blocking the orifices through walls or floors.

Since PVC is highly fire resistant, it is widely used in exterior construction materials such as window profiles, siding boards, or interior housing materials, such as wall-covering and flooring. It is also used in industrial facilities such as tanks, ducts, parting strips, or for sign boards, corrugated boards, and cable coverings. There may be many ways of evaluating the fire retarding properties, but the oxygen index can be used for the evaluation with a comparatively high precision and reproducibility of the results. It represents the minimum oxygen concentration required for the test piece to continue burning in mixed gas of oxygen and nitrogen. A high value indicates good fire retarding properties. Since the oxygen concentration in the air is 21%, a plastic with an oxygen index greater than 22 has self-extinguishing property, while a plastic with oxygen index smaller than 21 is flammable. 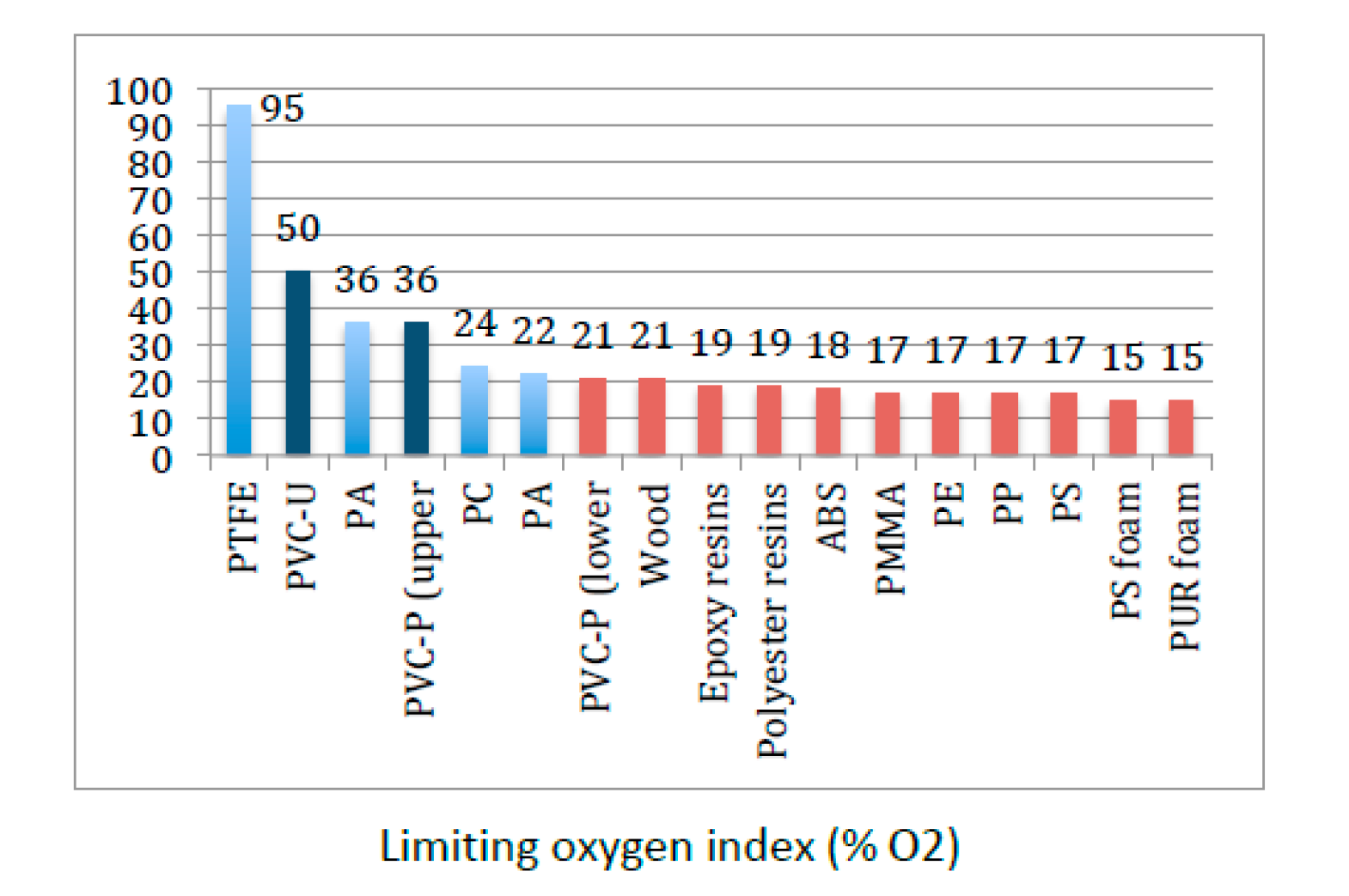 Fire resistant properties can also be given to olefin plastics such as PE and PP by cross-linking treatment or by adding large quantities of fire retardants. However, it would be difficult for these plastics to compete with the versatility of flexible PVC products, whose softness can be controlled with ease and which can be easily recycled.