Vinyl Chloride Monomer (VCM) is the key material from which PVC is made.

There are two methods to produce VCM: direct chlorination and oxychlorination. Direct chlorination sees ethylene and chlorine react within a catalyst-containing reactor to form EDC. EDC is then thermally cracked to yield VCM at a few hundred degrees Celsius. 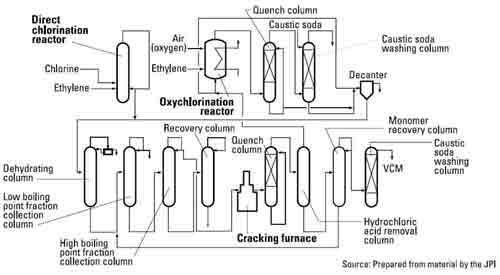 Historically, VCM was not produced from EDC but by the reaction of acetylene with HCl in the presence of a mercuric chloride catalyst. The industry spent several decades moving away from this technology as there was a strong environmental incentive to cease the use of the mercury-based catalyst. Today, this process is largely non-existent outside of China, where the availability of relatively cheap local coal makes the process economically attractive. Due to environmental concerns, China’s reliance on coal is probably past its peak, but interest in coal perseveres where supplies of oil are scarce or potentially scarce.

Care has to be taken in handling and storing VCM. Mostly because it is a highly flammable and potentially explosive gas (like the lighter fuel butane). But also because, if breathed in quantity, it is a strong narcotic (like chloroform). In fact, during the 1950’s VCM was trialled as a potential anaesthetic gas for medical applications. However, studies conducted during the 1970s on workers in PVC polymerisation plants revealed that VCM is a carcinogen, and significant exposure over a prolonged period can cause a rare form of cancer, known as angiosarcoma (cancer of liver blood vessels), if there is significant exposure over a prolonged period. Once industry discovered this link, major action was taken to reduce levels of exposure amongst industry personnel.

All manufacturing processes involving the use of VCM today are closed, and all personal exposure is avoided and closely monitored. Workers are regularly tested for even the lowest levels of exposure and there have been no incidences of angiosarcoma related to exposure since the PVC production process was modified. Other than potential flammability on release into the open atmosphere, VCM poses little threat to human health as it quickly dissipates, and degenerates when exposed to normal daylight.

Another threat to human health is the migration of microscopic amounts of residual chemicals from packaging into food. It is highly regulated today, and in part concerns PVC. During polymerisation, virtually all of the VCM is processed into the inert polymer chains that make up the PVC plastic. Nevertheless, it is possible for extremely low levels of residual, unpolymerised VCM to remain in the polymer, and to eventually migrate into food from PVC packaging.However, this only occurs at levels considered entirely harmless by health authorities, and which fall well within European Union regulations.

Regulation concerning VCM migration is based on the tests of independent toxicologists. In 1993 a five-year long Italian study, led by Professor Cesare Maltoni, Director of Bologna's Institute of Oncology, looked at the health effects on rats given mineral water from bottles made of PVC (which contained low levels of VCM) compared with water from glass bottles. There were no noticeable differences concerning the animals' lifespan, weight and general health during the tests and, importantly, no noticeable differences in the development of tumours.

Transporting VCM presents the same risks as transporting other flammable gases such as propane, butane or natural gas. No fatal accident has happened in Europe for the past 40 years. The most severe accident during this time was in 1996, in Germany. The accident involved rail transport of VCM, but the cause of the accident was thought to be the condition of the rail track, and not a fault in the rail cars. There were no casualties and no long term effects were observed. The equipment used for VCM transport is specifically designed to be resistant to impact and corrosion, and the industry is committed to further improving the safety of VCM transport, as far as is reasonably possible. 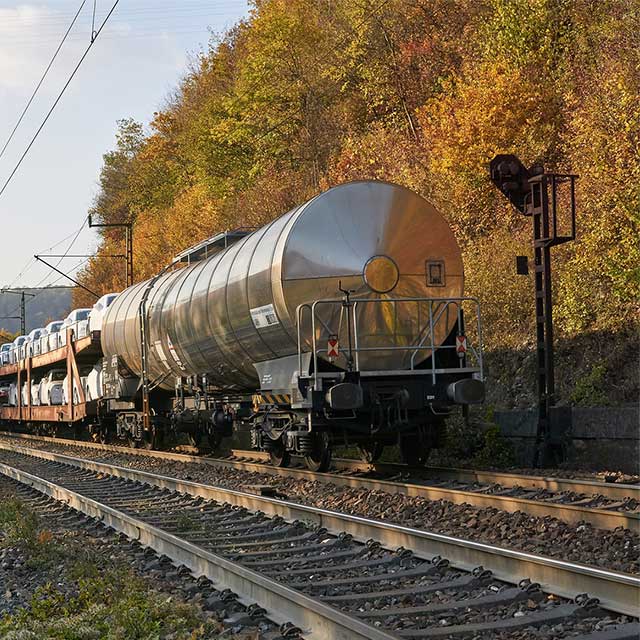